Welcome to Wagoneerforums.org! Register a free account today to become a member! Once signed in, you'll be able to participate on this site by adding your own topics and posts, as well as connect with other members through your own private inbox!

You are using an out of date browser. It may not display this or other websites correctly.
You should upgrade or use an alternative browser.

Staring this thread where I will document my swap of the console cooler into a GW series 1 which doesn’t offer this from the factory. I have the following two parts on order already:

My biggest concern is the wiring harness and whether or not it will have the connection for the fridge. Looking at the catalog there are over a dozen different model numbers for the center console wiring and none indicate what the variances are. Also none are currently available to order. Definitely worried about how hard it will be to disassemble the console without seeing someone else do it first but looking at the parts diagrams on the Mopar store has helped. Most likely I’ll try and simply pull some power from the existing wiring and bypass the harness issue all together unless by some chance the factory connections are already there.

Parts should be here in the next week or so per my fulfilling dealer so I’ll show off the cooler once it’s here and maybe inspire anyone else to take the plunge that may get their ride before I do.

FYI in case anyone is inclined to want to swap to the lock box instead of the cooler, you can find that here: 6UT991XHAA
Last edited: Oct 2, 2021
S

So far this is what I have to go off of. Anticipating I will need to remove both front seats to get proper access. From there I guess order of march would be remove all the side panels of the console, remove cup holder/shifter assembly, remove upper storage bin trim (item 10 in 3rd diagram), pull out old storage bin and do the swap/wiring. Anyone seeing this a different way? 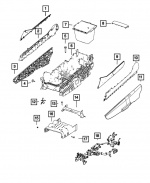 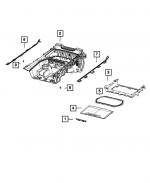 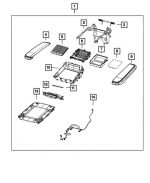 Cooler and lid finally arrived. I watched some more vids and will definitely need an additional trim piece from the console bin lid to attach the refrigerator lid to. The ones that come with the normal storage bin configuration are completely flush and have no way to attach the refrigerator lid. Will probably have to wait till I take the OEM piece off of the jeep to see what part # that is and then find the related versions for this application, but that shouldn't stop the cooler from at least being able to go in.

Good news is that it looks like we have a standard positive/negative power wiring and nothing else to fuss as far as electronics so even if I can't plug it in directly via the OEM harness this will be easy to tap with some aux power from a 12v outlet. Should be able to swap with new wiring directly where the black/red terminals plug in.

Now I just need the darn Jeep to get built 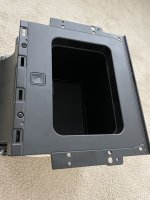 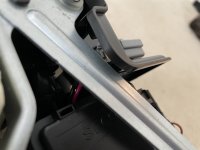 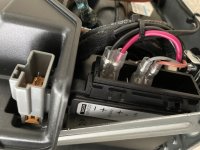 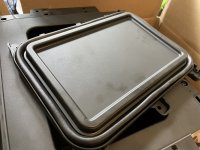